The Armagnac region of Gascony in Southwest France is 300km south of Cognac and 100km east of the Atlantic. If you visit, you’ll find 15,000 hectares of grapevines, ten grape varieties, abundant foie gras, world-class apple tart, and France’s oldest distilling tradition. The local brandies are not as famous as their cousins from Cognac, but their rustic character and unique charm has been popular with the initiated for centuries.

The Vatican archives contain a document written in in 1310 by Prior Vital Dufour, a priest and early spirits enthusiast, which extolls the ’40 virtues of Armagnac’. The primitive listicle identifies the power Armagnac has to ‘render men joyous’ and ‘enliven the spirit’ before making slightly more dubious claims about the preservation of youth and the curing of hepatitis. While it may not be totally accurate, Dufour’s account does make a strong case for Armagnac as one of the world’s great spirits.

Understanding Armagnac as a sprit first requires us to look at Armagnac as a place. The three production areas that make up the region – Bas-Armagnac on the west of the appellation, Haut-Armagnac to the east and south, and Ténarèze in the centre – each provide different conditions for grapevines. Fruit grown in the tawny sands of Bas-Armagnac can have different qualities to that grown in the chalk and clay of Haut-Armagnac. When these grapes are made into wine, which is in turn made into brandy, characteristics from their place of origin will carry through. Environmental factors like geology and climate and their impact on flavour are known in winemaking as terroir. A glass of Gascogne brandy will show something of the land from which it came; it will literally taste of the soil. In a good way. 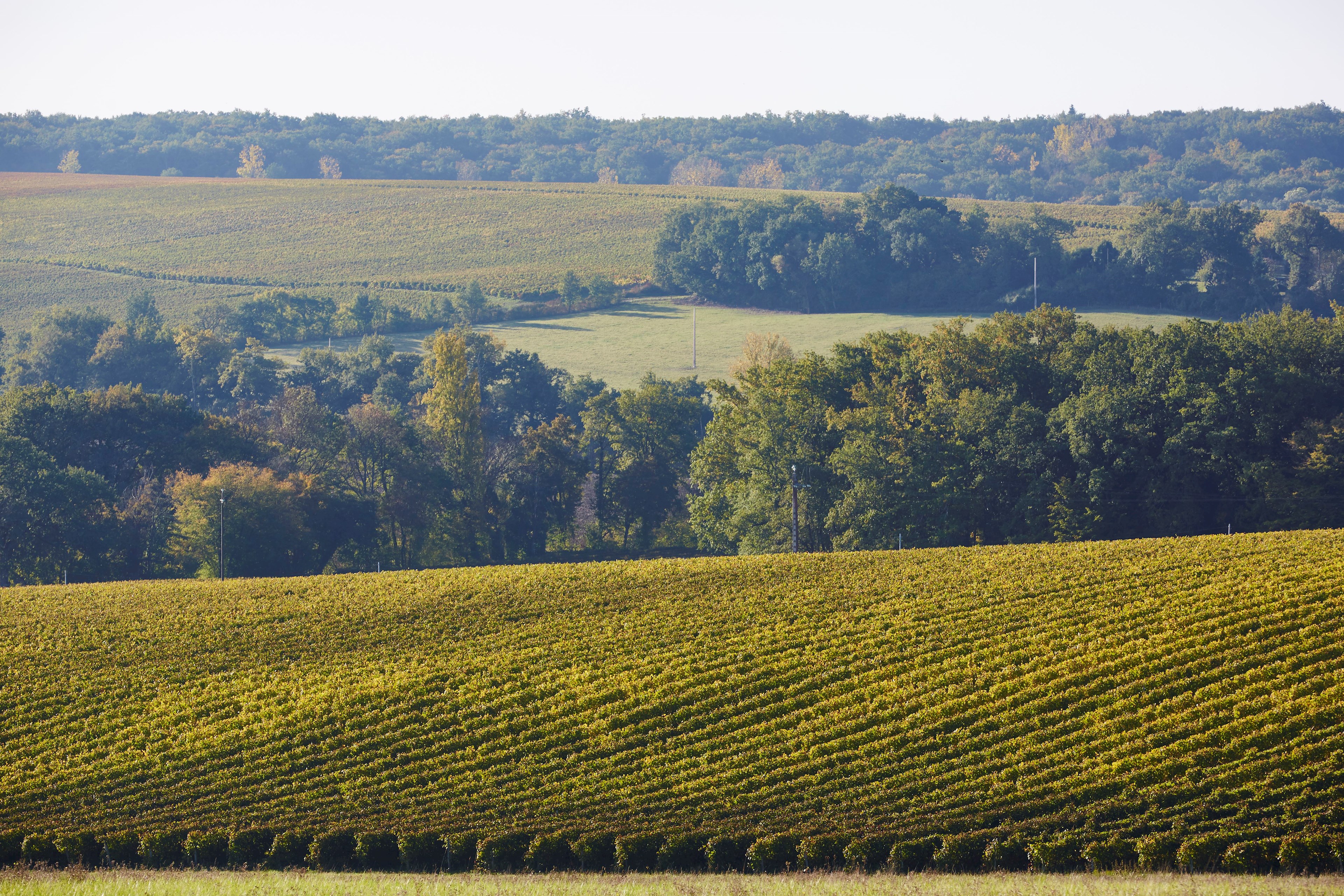 Four grapes account for the majority of Armagnac production. The most common is fruity and dependable Ugni-blanc, which makes perfect wine for distilling and is also the favourite grape in Cognac. The second most planted variety is Baco, a hybrid species that was developed in the 19th century to thwart the invasive phylloxera aphid. What remains is mostly made up of Colombard and Folle Blanche – the distiller’s grape of choice before the aforementioned aphid made a meal of its delicate vines. In these four varieties we have the essential building blocks of Armagnac, each contributing a flavour that producers can call on individually or in combination.

The vast majority of Armagnac is created by blending distillates from different grapes, though ‘single cepage’ bottlings that showcase one variety are also produced. The big four grapes listed above account for the majority of Armagnac on our shelves but they’re by no means the only ones permitted. Root around the vineyards of Gascony long enough and you’ll find Clairette de Gascogne, Jurançon blanc, Mauzac Rosé and Mauzac Blanc, Meslier Saint François, and Plant de Graisse – all of which can lawfully be used. It’s a rich viticulture that speaks to the broader biodiversity of the region.

September is harvest time in Gascony. As summer comes to an end, grapes are picked and pressed to extract their juice, known as ‘must’. Naturally-occurring yeasts immediately begin to consume sugars in the grape must, producing a vast array of flavour compounds and the alcohol that will form the basis of our spirit. These microorganisms, present on the skins of the grapes and in the air that surrounds them, vary from place to place and bring their own aspects to the process. Cultured yeast can be added to give them a boost but no preservative sulphites or additional sugars are permitted. As a result, these high acidity, low-ABV white wines are bright, fresh, and fragile. They will also be left cloudy, with swirling particles of spent yeast known as the fine lees left intact to promote chemical complexity. Strict regulations state that these wines must be distilled before the 31st of March the following year to ensure their essence is captured. As autumn sets in across the region, distilling season begins.

The lighting of the Armagnac still is a ritual affair – traditionally accompanied by music, feasting, and drinking. During this time, it is not unusual to see distillers on the roads towing their distinctive Alambic Armagnacais from estate to chateau to small farmstead. These itinerant craftsmen have been an important part of the local economy since the early-19th century, allowing houses without stills of their own to lay down Armagnac for the future. In addition to the five roving distillers (all of which operate multiple stills) there are five professional distilleries, three co-operative distilleries, and 48 houses with alambics of their own. Though a small number of these maintain pot stills of the kind found in Cognac, the short columned Armagnac still is responsible for over 95% of brandy made in the region. The alambic is capable of continuous distillation, meaning that as long as the fire is fed and the flow of wine remains constant they can operate around the clock. In the case of traditional wood-fired designs this means the distillers carefully tending the boiler to maintain constant temperature, sometimes for days at a time. 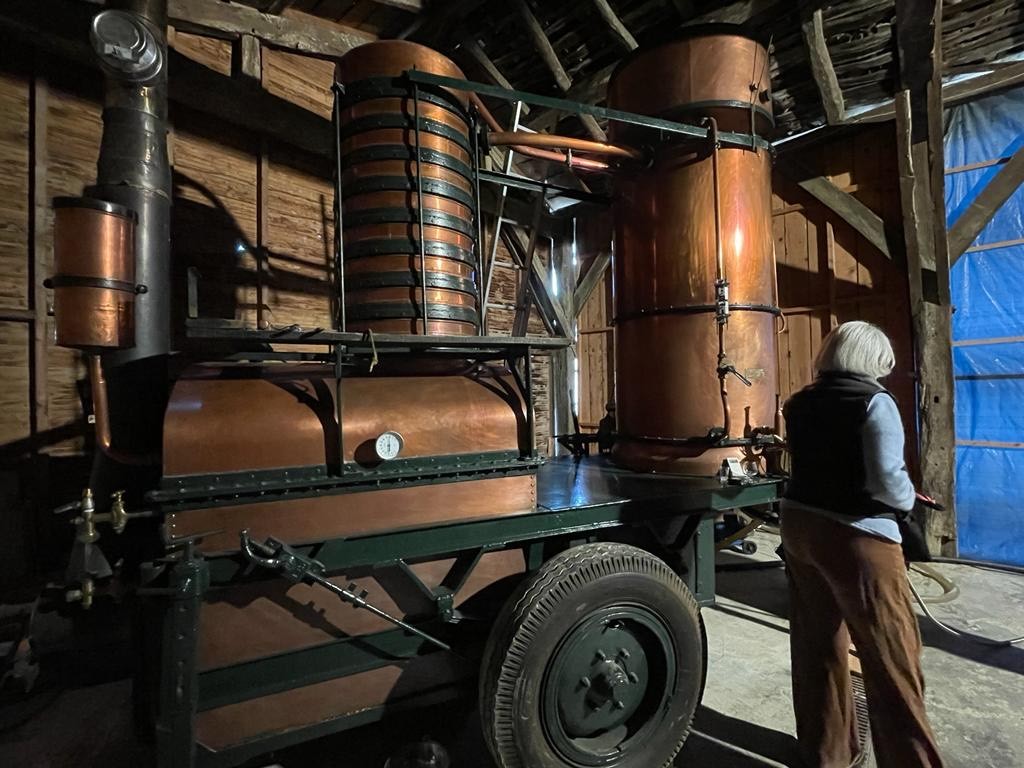 The fresh eau-de-vie that trickles off the still is clear, colourless, and intensely aromatic – coming in at between 52-and-72.4% ABV. One of the advantages of this unusual alambic is that it allows for distillation to lower strengths, which means greater concentration of the compounds responsible for flavour and texture. The profile of this un-aged spirit will vary hugely based on the combination of still, grape, and terroir – but if you get close to it you might find it smells like blossoms, wildflowers, apples, pears, or stone-fruit.

If producers or negociants (the bottlers and brokers of Armagnac) choose to, they can bottle it without ageing. Doing so requires a minimum period of three months resting in inert vessels to promote aeration and a reduction of the alcohol content. If the resulting spirit passes muster with a jury of industry experts it can be sold as AOC Blanche Armagnac, which in Gascony has historically be taken as a palate cleanser between courses at dinner. This style of Armagnac, however, only accounts for a small amount of what the region produces. The vast majority of eau-de-vie distilled between October and March is destined to spend years in the cellars of chateaus and estates, slowly maturing in cask.

French oak has as much a part to play in shaping Armagnac as grape or soil. Coopers will favour mature trees with straight trunks, un-damaged by disease or frost. The staves cut from these old oaks will be left to dry and season in the open air for up to a decade before they are ready to be shaped into 400-litre casks and toasted prior to filling. Armagnac barrels, known locally as pieces, will have different effects on eau-de-vie depending on their origins and treatment. Wide-grained pedunculate oak from Monluzun in Bas-Armagnac will have more abundant tannin than fine-grained sessile oak from Allier or Nevers. The level of toast applied will also affect how tannins, sugars, and other compounds in the wood react with the spirit over time. The choice of cask, or indeed casks, a producer uses will have an impact on their mature Armagnac in years to come.

Eau-de-vie is filled into new casks for an initial period of maturation in which the oak will have a profound influence on the spirit – generally lasting between six months and two years. During this time the wood will release compounds responsible for astringency, nuttiness, and spice and the spirit will take on a darker, golden colour. However, too long and this active new oak will dominate the spirit. To ensure the essence of the distillate is preserved, the cellar master, whose job it is to watch over the eau-de-vie as it matures, will transfer it into used barrels for further aging. The oak influence from these containers is gentler and more conducive to long term development.

After one year of maturation, which is considered to have begun on April 1st after the official distilling period is over, the spirit can legally be sold as Armagnac, however many eaux-de-vie will at this point still be just at the start of their journey. The cellar master will cultivate the spirit in their care, moving it from cask to cask to promote aeration and manipulate its interaction with the oak. Some barrels will be marked for short-term maturation, others for long aging, and some exceptional examples for bottling as vintage expressions.

As years pass, the eau-de-vie will undergo dramatic transformation. The flowers and fresh fruit found in young Armagnac will, over time, give way to more mature flavours of dried fruit, chocolate, nuts, and spice. Given enough time, aromas of tropical fruit can emerge along with flavours like leather, tobacco, coffee, wax, and truffles – a set of characteristics known collectively as ‘rancio’. 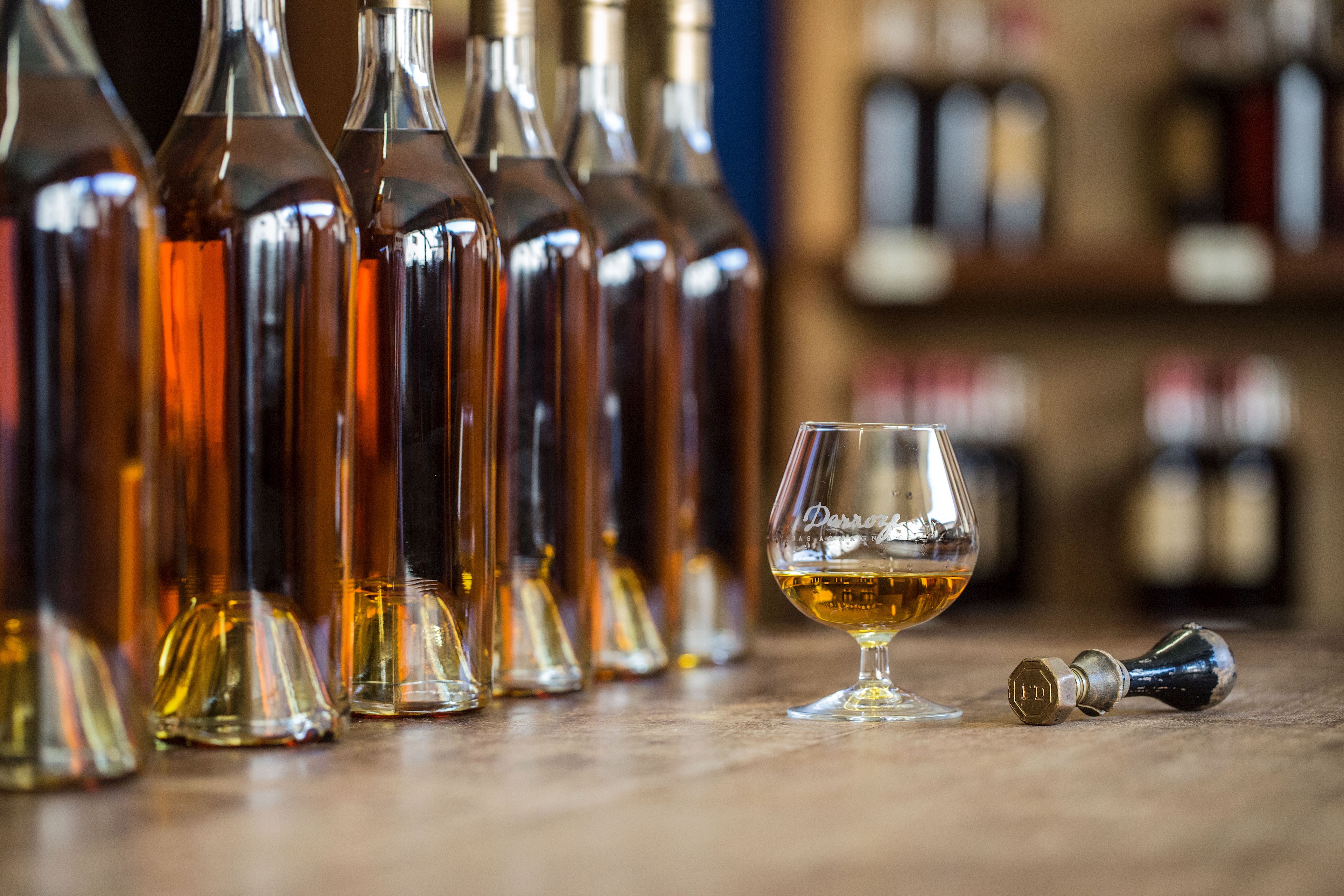 Most commercially-available Armagnac is blended for balance and depth, with different grape varieties, ages, and terroirs contributing individual notes and points of contrast. While producers can reduce the strength of their brandies with water to as low as 40%, it is not uncommon to see Armagnac bottled at natural cask strength. Blends in which all spirit within is aged at least one year are labelled as VS or three star; in VSOP Armagnac the youngest component must be four years old; and XO or Hors d’Age will consist of spirits aged for 10 years or more.

Vintage Armagnac, comprising eau-de-vie from a single harvest, must spend at least a decade in oak before bottling. However, many will age much longer than this, getting richer and more valuable as they do so. If casks are deemed to be at the very peak of their quality, meaning any more time in oak would be detrimental, their contents are filled into glass demijohns, known locally as ‘bonbonnes’. Under glass these precious spirits can be preserved, unchanging, until they are needed. Because of this practice, it is possible to find vintages dating back to the 19th century, each one a glimpse into Armagnac’s past.

From grape, to wine, to still, to oak, to glass, producers make decisions that refine the personality of their Armagnac. All of those variables make for a diverse spirit that can suit a range of tastes and situations. In addition to its role as a palate cleanser, Blanche Armagnac makes great company for smoked salmon and oysters. It’s also an easy substitute for other clear spirits in cocktails and holds its own in a Daiquiri or Paloma. Armagnac with a brighter, fresh-fruit profile can be used to cut through fattiness in food and makes a nice foil for cheese, charcuterie, and chocolate. It is traditional to drink longer-aged examples after dinner, perhaps with coffee on the side for contrast and lift, but they can also make a good pairing with meat and game. All of that said, though, you don’t need much to appreciate Armagnac of any style. All it really wants is a tasting glass and some time to unfold.