Over a ten-year period in the mid-19th century, French geologist Henri Coquand carried out the first scientific study of a wine-producing region.Working with a local oenologist, Coquand aimed to establish the effects that different growing conditions had on Cognac’s grapes.

Over the course of his study, he identified six distinct sub-regions – crus – each comprising distinct combinations of soil and terrain. The lines he drew in 1860 form the basis of our map of the region to this day, having become part of the legal definition of Cognac in 1938.

Confusingly enough, the name ‘Champagne’ refers to both the region of northern France known for its namesake sparkling wine and the heartland of Cognac some 600 kilometres away. In both instances the name appears to describe a place with low hills and acidic chalk soils, perfect for producing bright, fresh white wines.

Monsieur Coquand identified no less than three different types of chalk soil in Cognac. The finest being the Campanian, found on the sloping hills in the region’s centre; the more tightly packed Santonian found slightly further out; and the Cognacian chalk on which the town of Cognac itself is built. They were all formed in the Late Cretaceous period, some 66-to-145 million-years-ago. During this relative warm spell for planet Earth, inland seas swarmed with microscopic life built around calcium carbonate skeletons – little oysters and ammonites, mostly. Over the subsequent millennia their remains formed chalk deposits under Champagne, Jerez, and parts of southern England that would go on to form the literal foundation of these region’s wines. The six Cognac terroirs radiate out from a core of particularly pure Cretacean chalk. Without it, Cognac would likely not exist. 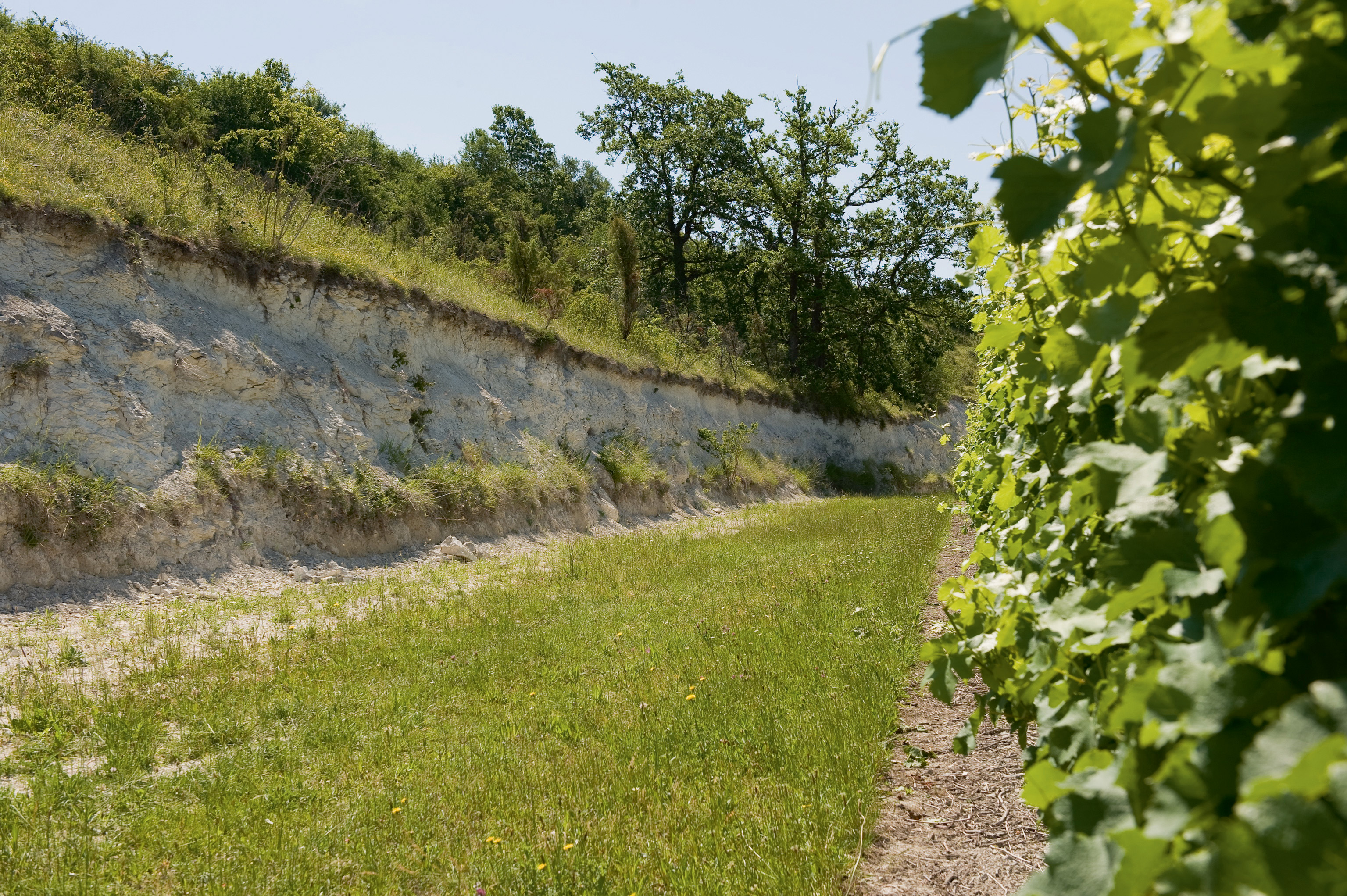 The top cru of Cognac, known for its rolling hills and crumbly chalk soil – the perfect conditions for producing acidic white wines from which the best eau-de-vie is made. Ironically, Grande Champagne is actually smaller in area than the neighbouring Petite Champagne though it is much more densely planted, with almost all of the arable land filled with vines for Cognac production. Eaux-de-vie from Grande Champagne are the most highly prized by blenders, showing great aroma, elegance, and long-aging potential.

The largest production area, with over 15,000 hectares of vineyards earmarked for distilling. Further out from the town of Cognac, the essential limestone-chalk soil here is denser and the landscape less hilly. Eaux-de-vie deriving from Cognac’s second cru are regarded almost as highly as those from Grande Champagne, possessing similar capacity for long maturation and a bright, floral character. The term Fine Champagne is used to describe Cognac made up of at least 50% Grande Champagne eau-de-vie, with the remainder coming from Petite Champagne.

By far the smallest of the crus in terms of area, Borderies is defined by a mix of clay and limestone known as groies. Its eau-de-vie is thought to mature a little faster than its counterparts from the Champagnes, which makes it a gift for blenders. By including a little nutty and intense Borderies in their blends, a cellar master can provide a sense of body and structure.

Across the bois, vines are sparse and planted in small pockets among the pastures and other farmland. The Fins Bois, literally ‘fine woods’ covers many different soil types including clay, stone, and a few patches of the superior chalk soils found closer to Cognac itself. While most of the light Fins Boise eau-de-vie is used to provide length and fruitiness to blends, some of the spirit which originates from the chalky areas shows great quality and personality of their own.

The largest of all the Cognac Terroirs, the Bons Bois contains diverse conditions ranging from sandy to rocky, with small pockets of the valuable chalk soils. As it forms a belt around the central region, this area also sees a variety of climatic conditions with greater influence from the ocean air in the west. Though mostly overlooked by the larger companies, some smaller houses release Cognac that showcases the Bon Bois’ diversity and potential.

Perched on Cognac’s north-western corner we find the sandy reaches of the Bois Ordinaries. There are only a small number of vines in this area, a little over a thousand hectares. Historically, the majority of eau-de-vie produced from this region was consumed locally or used to make liqueur or Pineau des Charentes. However, it has gained some attention in recent years for producing Cognac with a subtle maritime influence.