Long before the grapes reach the press, before they’re even picked, yeasts are there waiting for an opportunity. They’re on the fruit and the vine, on the hands of the viticulteurs and in the air around them. When harvest time rolls around, those yeasts get to work almost immediately, taking advantage of any break in the grape’s skin to make inroads and consume the sugars inside.

For the grower, it’s important to control this process as much as possible. They must work quickly to make sure fermentation happens on their terms. Exposure to excess heat, oxygen, or too much time between picking and pressing can create undesirable notes that will be amplified by distillation. As soon as a bunch of grapes is picked, the clock is ticking.

Fruit is pressed, usually twice, to extract its juice. Once transferred to fermentation tanks, the naturally occurring yeasts in the juice (or ‘must’) will be reinforced by cultivated yeasts, carefully raised to carry out the task of turning sugar into alcohol. Of course, to say their purpose is to produce alcohol undersells them slightly. Besides ethanol, these trillions of microorganisms will also produce aldehydes, fatty acids, and various other esters – diverse chemical compounds that might, to us, smell like pears, violets, oranges, or jasmine. It’s more important for this base wine to be acidic and low in alcohol than to be delicious in itself, but many of the flavours that will be intensified by later stages of production are created by yeasts.

After alcoholic fermentation is completed, a second fermentation is often carried out not by yeast, but by lactic acid bacteria. This LAB, as it’s known to its friends, multiplies in the must after the yeast cells have converted the available sugars into alcohol and have begun to die. Rising up to take the place of the departed yeasts, LAB starts chewing through sharp and tart malic acid in the grape must and turning it into soft and creamy lactic acid. This extra step isn’t legally necessary to make Cognac but it serves the double purpose of adding rounder texture to eau de vie and removing the malic acid which can promote bacterial growth. These wines are delicate and can’t be made using sulphur as a preservative, so anything that can be done to stop unwanted colonists spoiling proceedings is desirable. The resulting wines – pale, cloudy and light – mark the end of the first part of production and set the stage for everything that’s to follow.

At this point, the growers will hand the wine to the next person in the Cognac supply chain. Generally speaking, the industry is a collaboration between growers, distillers and the négociants or maisons de négoce – the so-called Cognac houses – that mature, blend, and bottle Cognac. It’s a model that emerged in the very earliest days of the business and continues to support production to this day. Of course, if you look a little closer at the way things are done in the Charente you’ll find it isn’t always this simple. Growers might act as bouilleurs de cru and distil a little of their own wine, selling the resulting eau de vie to a négociant later or bottling it themselves. Likewise, houses might distil some of their requirement on the estate or even buy mature eau-de-vie to fill gaps in their stocks. In some rare instances, houses will distil 100% of their product themselves. One such house is Frapin in Segonzac, where cellar master Patrice Piveteau oversees all aspects of manufacture from grape, to still, to glass. 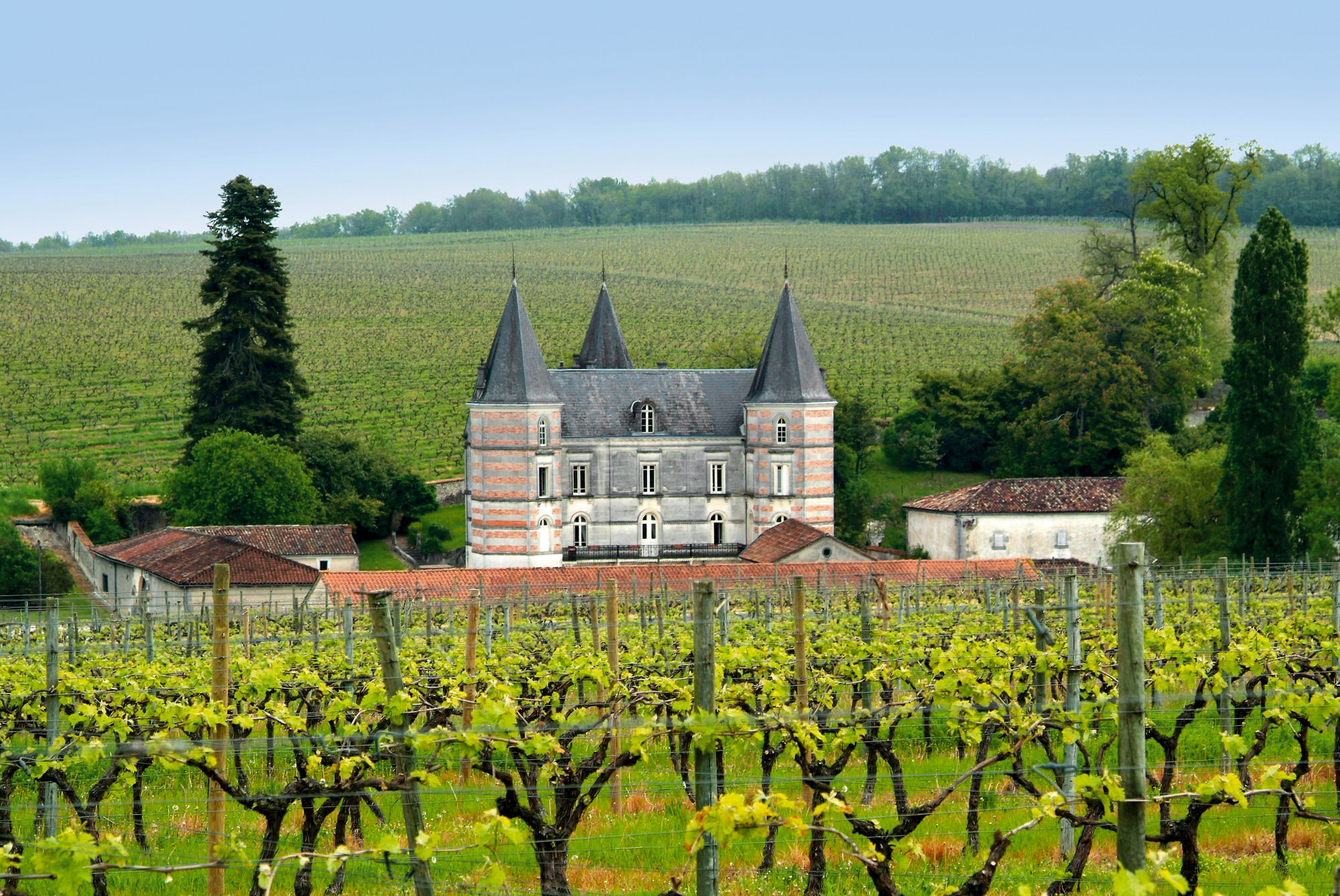 Though Cognac produced in this way is not definitionally better that those that draw on the talents of different growers and distillers, it does offer an intriguing sense of provenance, perhaps analogous to single malt whisky. ‘At Frapin, we control all aspects of the process. All our Cognacs are exclusively harvested, distilled and aged at the estate in the heart of Grande Champagne,’ Patrice tells us. ‘It is a real advantage to manage all these steps internally because we can push the quality at each point, in order to guarantee the Frapin style.’ Every bottle the estate produces begins with grapes harvested from 240 hectares of chalk and limestone soil in Grande Champagne. The two-stage fermentation is carried out on-site, ensuring there is as little time between picking and pressing as possible. After this fermentation, the resulting wines need only travel the short distance to the distillery at Château de Fontpinot.

The water of life

The Frapin still house contains six copper pot stills, hand-hammered by a single coppersmith to exact specifications. In the iconic alambic Charentais, wine enters the copper pot and is heated via direct fire to the point where the alcohols in the wine begin to vaporise. The vapour is then condensed in a coil of copper tubing suspended in a tank of water – but again, that’s really just the simplest way of describing the process. Inside the still new esters are created, sulphur compounds react with the copper, unpalatable elements are stripped away and desirable aromas are intensified. After an initial distillation yields a low-alcohol liquid known as brouillis a second distillation creates the fresh eau-de-vie, known as la bonne chauffe. 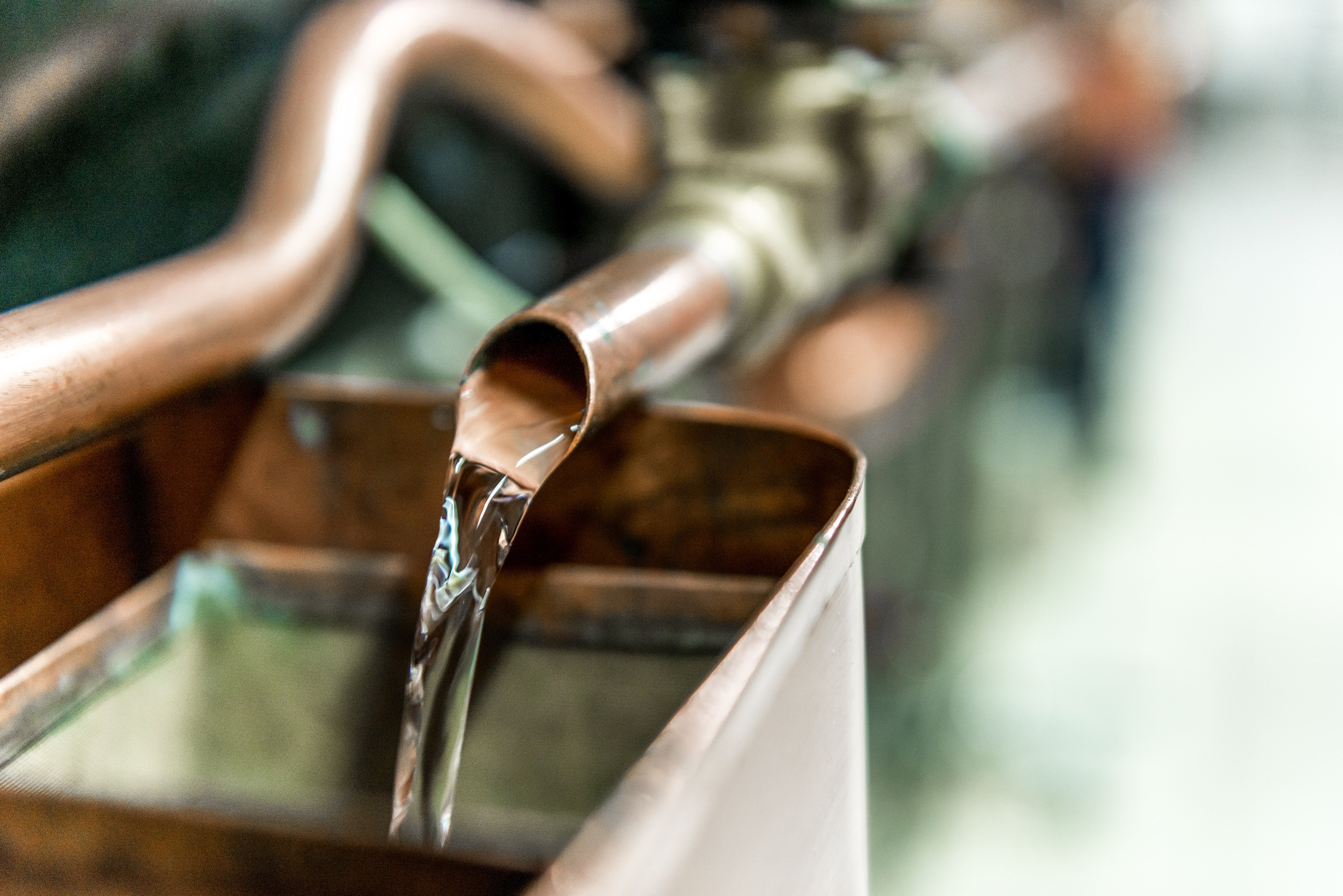 What was started during fermentation is fully realised through this process of double distillation. As different compounds are volatile at different temperatures – and so will vaporise at different points – the distiller must decide when to make a ‘cut’ of the spirit coming off the still – a decision which will have a huge impact on the ultimate character of their eau-de-vie. As in other forms of distillation, the most volatile elements condense first and are discarded, as are the heavier compounds, that vaporise towards the end of the run. ‘At Frapin we speak about a handcrafted distillation,’ says Patrice Piveteau. ‘Our four master distillers make the cutting of heads, bonne chauffe, seconds, and tails only by smelling and tasting – there is no computer involved. The idea is to adapt to what we are looking for and to always push the quality.’ Though Cognac can be distilled from a filtered wine, which is easier on the equipment, at Frapin and other houses they choose to carry out distillation ‘on the lees’. This means that wine flowing into the alambic will be cloudy with spent yeast and particles of fruit. These remnants of that vital stage in the process adding yet more complexity to the product, even after their demise.

Discussion of Cognac production often focuses on the terroir of the Champagnes or the limestone cellars where barrels of eau de vie rest for years and decades. While these are important parts of the picture, we should not overlook the role of fermentation in creating flavours that are preserved and intensified through distillation. Of his freshly made eau-de-vie, Patrice remarks that it already has many of the hallmarks of Frapin. ‘It offers a character of finesses, of freshness, that we will then find within our Cognacs.’ Though microorganisms and copper might not feel synonymous with luxury, they are the stuff from which flavour is made. Without them, grapes are just a raw material, and Cognac is just a place.